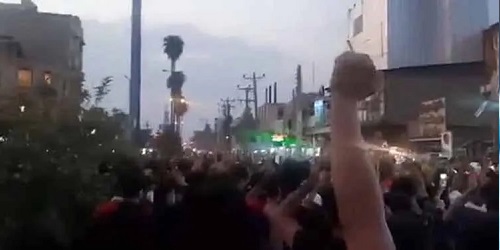 In 2021, two officials who have committed tremendous rights violations for decades, the mullah’s President Ebrahim Raisi and Judiciary Chief Gholam-Hossein Mohseni-Eje’I, ascended to top positions of power in Iran.

Suppression of activists intensified, as did the crackdown on Iran protests in 2021.

Beset by a whole host of economic, social and political crises, the clerical regime tried to rein in simmering social discontent by use of brute force.
This is while that the Iranian people from all walks of life, have been protesting the regime’s failure to resolve numerous crises in the country that are affecting their lives.
State forces kill protesters in Sistan and Baluchestan

The bloody crackdown on fuel transporters in Iran’s Sistan and Baluchistan Province in February is more evidence of the regime’s intention to stifle any form of dissent.
The state security forces used lethal state force used against demonstrators since unrest broke out in the area on February 22, 2021, killing at least 40 men and injuring more than 100 in the southeast province amid an intermittent shutdown of the internet.

Deadly repression of protests against water, power shortages
The unlawful killings of protesters by state security forces in Iran’s drought-ridden Khuzestan Province added to concerns that the rights situation in Iran steadily worsened.

The report noted that since the protests over water shortages began in Khuzestan on July 15, security forces have “killed at least eight protesters and bystanders, including a teenage boy, in seven different cities” and that “scores of people, including children, have been injured, including by birdshot, and several are hospitalized in critical condition due to gunshot wounds.” The report also stated that “Security and intelligence forces have swept up dozens of protesters and activists, including many from the Ahwazi Arab minority, in mass arrests” and that “many injured protesters are not seeking hospital treatment due to fear of arrests.”

The regime’s violent crackdown on large protests in the city of Isfahan that broke out in November over severe state mismanagement of water resources is another evidence of the clerical regime’s policy of no-tolerance of peaceful protests and dissent.

The mullahs’ mismanagement of Iran’s rivers and water has led to the destruction of agriculture and animal husbandry in the area. Many farmers had to sell their livestock to survive.
During the protests, thousands of farmers camped on the Zayandeh Rud’s dry riverbed in Isfahan to voice frustration with the regime policies.

on November 24, security forces set fire to tents belonging to the protesters, fired into crowds, and judicial authorities announced the arrests of several people.
Amateur videos showed the security forces’ violent tactics to scatter the crowd. They also showed several protesters with bloodied heads and backs bruised by pellets.

Government troops forcefully cracked down on protesters firing tear gas and birdshots, blinding some 40 protesters and wounding at least 100. They arrested around 300 of the participants in the protest including minors, according to local sources.

The suppression of the protests was accompanied by state-controlled disruptions of the internet to prevent the free flow of information within the country and to prevent people from sending videos and photos to foreign media outlets where they could get more coverage.