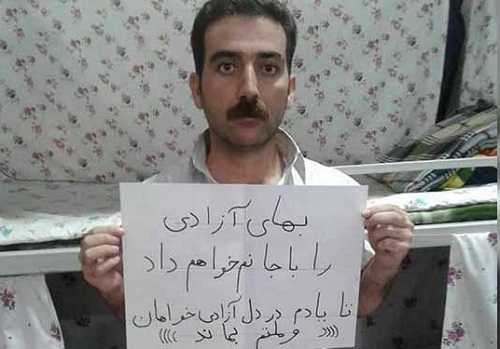 Forty-four days after the execution of Kurd political prisoner Hedayat Abdullahpour, his family learned that he was killed by a firing squad on May 11.

Based on a death certificate handed over to Hedayat Abdullahpour’s family, they confirmed today that his execution was carried out in a barrack in the northwestern town of Oshnavieh.

Farhad Abdullahpour, Hedayat’s brother, confirmed the news and said: “The registry office of Oshnavieh has issued a death certificate for Hedayat Abdullahpour, according to which Hedayat was executed on May 11.”

The death certificate states the cause of death was a “collision of a hard object or a bullet.”

The Kurdish political prisoner who had been on death row in the central prison in Urmia, West Azerbaijan province, since 2017, was transferred to an undisclosed location on May 9, 2020.

His family sought information about his fate and whereabouts from various official entities. However, Iranian authorities refused to provide them with any information.
On May 12, the deputy prosecutor in Urmia told his family: “When the ministry of intelligence and the Revolutionary Guards do not tell you where your relative is, you better refer to the cemetery.”

On June 10, the head of the Centre for the Implementation of Sentences in the city of Urmia in Iran’s West Azerbaijan province told his family he had been executed three weeks ago.

When the family asked why they had not been informed in advance, the official claimed that he was not allowed to provide further information. He added that the execution had been carried out following “an order from above,” in an apparent reference to the Revolutionary Guards overseeing the case.
The authorities have refused to reveal the location of the dissident’s grave so far.

Pleading with Iranian judiciary chief Ebrahim Raisi for information about the dissident, his father, Abubakar, said in a voice message on June 15: “Shame on you. If you have executed my child, return his body. Set Islam aside and be human.”

Hedayat Abdollahpour was detained along with dozens of other people on June 15, 2016, after a clash in his village in Qarah Soqol in Oshnavieh.
The clash was between the Kurdish Democratic Party of Iran (KDPI) rebels and Iran’s Islamic Revolutionary Guard Corps (IRGC), with casualties on both sides. Those arrested were suspected of supporting the Kurdish group.

Abdollahpour was accused of being a KDPI member and sentenced to death in 2017 after what rights group Amnesty International called a “grossly unfair” trial.
The dissident consistently denied involvement with KDPI or its 2016 battle with the IRGC. His family said he lost hearing in one ear from apparent torture after his arrest and later retracted in court a confession that he had made under torture.