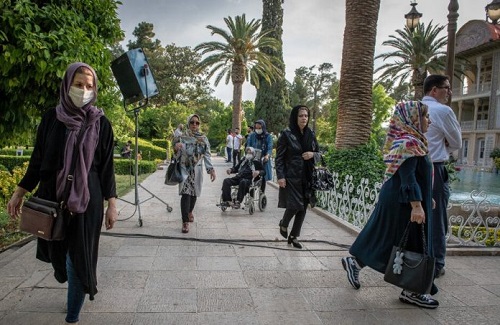 Today, in its engineered statistics, the Health Ministry spokesman announced that 81 Coronavirus patients had died in the last 24 hours, the highest in the previous 35 days. He also put the number of new cases of infections in the past 24 hours at 2,979, the highest in two months.

The regime’s Health Minister told the official news agency, IRNA, today, “In Khuzestan and many other hot provinces and provinces such as Kermanshah, Hormozgan, Sistan and Baluchestan, we are now seeing the return of, and the increase in cases of this disease. This situation can also occur in other provinces … Last week we had cases of patients dying at the age of 32 or 42 due to Coronavirus without any previous illnesses. If we are negligent, the situation will go back.”
Tehran’s governor was also quoted by IRNA news agency, as saying yesterday, “We must not give false confidence to people about this disease and should avoid normalizing the situation … We have about 1,400 people hospitalized, more than 600 of whom are intensive care patients.”

The head of the National Coronavirus Combat Taskforce (NCCT) in Tehran, Alireza Zali, told the state TV, yesterday, “Coronavirus danger has not been eliminated whatsoever from the country, including in Tehran Province.”

In Khuzestan, a spokesman for Ahvaz University of Medical Sciences put the number of infections at 14,647 and the death toll at 565, according to a Mehr state news agency report yesterday.

In Sistan and Baluchestan, the president of Zahedan University of Medical Sciences was quoted by ISNA as saying yesterday, “The new peak of Coronavirus disease has started with an increasing trend in the Province, especially in the southern cities.” Iranshahr University of Medical Sciences Vice-Chancellor told the Tasnim news agency yesterday, “Five cities, Iranshahr, Chabahar, Bampur, Sarbaz, and Konarak within the area of this university are in a red situation. Sistan and Baluchestan is the second Province with the highest number of red status cities after Khuzestan.”

In Lorestan, the director-general of the Province’s civil defence told Mehr news agency yesterday, “Unfortunately, Lorestan has reached the brink of crisis in terms of the prevalence of Coronavirus infection. At the Coronavirus National Headquarters, Lorestan has been named as the Province with the highest prevalence of the disease, and unfortunately, this trend is increasing. The Vice President of the Province’s University of Medical Sciences added, “Most of our cities are not in good condition… the centre of the province and other cities are red.”

In Kurdistan, the head of Towhid Hospital in Sanandaj told Fars news agency today, “The capacity of the centre for heart surgery of the Towhid Hospital, which is the auxiliary centre for patients infected with Coronavirus, is full. In the last two weeks, due to the high volume of patients infected with Coronavirus, seven other wards of Towhid Hospital, which provided services to other patients, were used to hospitalize these patients. So we have encountered problems to serve other chronic patients … ”

Official news agency IRNA, reporting from Kermanshah on May 31, quoted the governor as saying, “Statistics show that in Kermanshah Province, we are witnessing an increasing trend in the number of hospitalizations and patients with Coronavirus, as well as in the number of deaths.” Asr-e-Iran website reporting on the same day published remarks by the President of Kermanshah University of Medical Sciences who said, “600 tests are performed daily in the province, 30% of which are positive.” The Governor of Javanrud was also quoted on the same day by the Javan website of the IRGC as saying, “Unfortunately, the situation regarding the Coronavirus in this city is red and worrying.”

Aftab News reported today that in Khorasan Razavi Province, the Governor of Neyshabur revealed, “The death toll caused by Coronavirus has been on the rise from May 21 to May 30, and we have entered a new peak.”

According to Javan on May 31, the President of the University of Medical Sciences in West Azerbaijan Province said, “In the last five or six days, the number of people with COVID-19 in the Province has increased significantly, which is a warning sign for the recurrence of the disease … We may witness a second peak soon in the Province,”

In Qazvin, Mehr news agency quoted the deputy governor of Buin Zahra as saying today, “Unfortunately, the trend of infection with Coronavirus has turned upwards across Buin Zahra. If this trend continues, the situation in Buin Zahra will turn red in the coming days.”